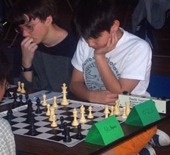 Chess is a mix of complexity and contradiction. It’s entertaining, and serious. It demands imagination and creativity, yet depends upon established patterns. Players must operate in the immediate, while imagining the future. It’s as challenging as the most rigorous of mathematic or scientific problems, yet it’s fun. It appears to proceed at a meditative pace, but the excitement is electric. And perhaps because of its unique counterposing of these and many more such opposites, chess is perfect for kids.

Impact on Children
Though chess has been around for over two thousand years, new evidence suggests it is one of history’s most valuable educational tools. In 1997 studies found that the hidden rewards for students of chess are surfacing on test results in reading, science, and math, along with findings that indicate growth in critical cognitive abilities such as deducing, hypothesizing, strategic thinking, logic, future thinking and judgement. Beyond academia, chess also appears to influence social behavior, including self-esteem, respect for others, patience and old-fashioned notions of good manners. 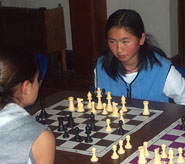 Other research indicates the skills involved in playing chess are similar to those used in acquiring language. In short, a database of information is acquired (learning the pieces, their moves, and the openings, in addition to classifying them), which is then activated. Through use, shaped by training and experimental feedback, the student automatically engages deeper, more complex thinking skills. Comparisons have also been made between the type of thinking required by mathematicians and scientists to those of the chessplayer, not the least among them originality, that quality of on-demand inventiveness.

Chess is one of ancient culture’s most valuable gifts to contemporary learners. It is rare we encounter a phenomenon that comes to us already well tested by time, by generations of people from all classes, of all languages, nationalities, both male and female. It is rare that we find within a single activity an opportunity to learn, to teach, to share, to invent, to compete, to entertain, and happily not to harm ourselves or others. The activity is chess. All it requires is curiosity.