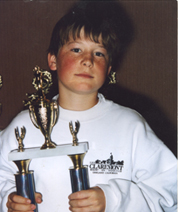 At a USCF-rated chess tournament in Rochester, New York last November, BCS alumnus and former chess teacher David Petty quietly achieved a lifetime goal: the prestigious title of National Master. David, who started chess at Kensington Elementary at the age of six, recently shared some of the challenges he’s encountered on the way to his great achievement – and the life lessons he’s learned.

BCS: What does this accomplishment mean to you?
Reaching National Master is a huge accomplishment. It’s an accumulation of almost 25 years of patient study, success, disappointment, and, through everything, a fierce love of the game. And just like the graduate student who finally finishes their PhD, I now have a “title” which is a recognizable symbol of achievement throughout the chess community.

BCS: What were your greatest challenges in getting to this point?
One of the biggest challenges is resisting the feeling that you’ve plateaued; progressing in chess is often so slow it can feel like you’re standing still. It took me five years to drag myself slowly up from 2000 to 2200, and I’d been treading water at 2150 for almost 12 months before I finally made master. It’s not easy to persevere through years of apparent lack of progress, so one way that I deal with this is to try and make my games fun and exciting. I force myself to take risks in my games, to try out openings that I’ve never played before, to attempt different styles.

You can also stagnate by becoming too “secure” in one style, opening, or niche. If you play the same opening every single game, sure, you’ll play that opening well, but at some point you stop learning and your games will start to become very similar and repetitive. At the same time, it’s not easy to play something you don’t know well, because you’re “risking rating points”, and scared that you’ll lose what you’ve gained. But living in fear like this is death to creativity, progress, and most of all to the fun of the game.

BCS: What are some other challenges you’ve faced?
Consistency — to stick with it and keep playing. You don’t always feel like sitting through a rated chess game for four hours on a Friday night. But I’ve forced myself to play at least one game a week for the past three years (usually by signing up for weekly leagues, so I have a commitment to be there).

On the day of my game, I make sure that I get enough rest, and eat well. If possible I think about the game and my opponent in advance. Consistency is not always easy, but it’s the best way to make progress in the long run.

A fourth big challenge is to avoid psyching yourself out. It’s inspiring to win a great game, but the flip side, as anyone can tell you, is to get stuck in a losing streak. When this happens, the pain of losing again and again often causes players to quit “for a while”…and this can turn into six months, a year, or forever. Players get too stuck in their heads about their rating and status. The fear of losing all the points they have accumulated can cause anyone to stop playing. But that’s crazy! If you love the game, you should keep playing. Even if you’re stuck in a losing streak, all you need to do is win that one game and suddenly you’ll feel different. Taking a break is fine, but get back on that horse sooner or later.

BCS: Tell us about the tournament that got you “over the top”.
Last June I was very close to making National Master. My rating was 2189 and I just needed one good tournament to cross the finish line. As luck would have it, I was in Berkeley and I played in two back-to-back Friday Night tournaments at BCS. Instead of breaking 2200 at a BCS tournament like I had hoped, I lost two games in a row and dropped back down to 2160 where I languished for 6 more months. Even though this was very discouraging, I forced myself to keep playing and was having fun again within a week or two.

As it so happens, I ended up crossing 2200 by accident. I had one very good tournament where I scored 8.5/10 against strong opponents, and jumped 60 points at once from 2146 to 2206. Since I didn’t think I could gain that much at once, I wasn’t even thinking about “becoming a master” and so I completely avoided the psychological trap of “what if I win? what if I win?” causing me to lose focus and mess up.

BCS: Aside from the obvious prestige that goes along with being a National Master, what does a 2200 rating mean for your tournament play going forward?
I will definitely continue to compete in tournaments. In local tournaments nothing will change, but when I compete in certain larger tournaments, I will now be playing in the “Open Section” — which is typically players rated 2200 and up. I will go from big fish to little fish, and have to change my mindset and expectations. Instead of trying to win all of my games against lower ranked experts, I will have to grovel draws against experienced masters.

BCS: How many people in the world achieve this rating?
The National Master title is specific to the country you live in, so I can only answer compared to the other players in the US.  Now that I’ve crossed the 2200 threshold, I am ranked around 800 out of the 54,000 active players in the country, somewhere in the top 1.5-2% of US players. My immediate goal is to maintain myself at 2200, but in the future I want to raise myself up to 2300 USCF, and someday to 2300 FIDE (international ranking system), which would make me a “FIDE Master”…kind of like my current National Master title, but on a global scale. One of the biggest challenges is to never think of yourself as complete, or a “permanent such-and-such”. You can always learn more and improve. 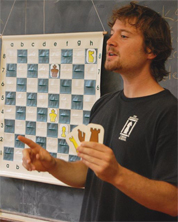 BCS: What were your greatest mentors along the way to achieving the ranking of Master?

I’ve had two great chess mentors. As a kid my greatest mentor was Robert Haines, a teacher who I met through the Berkeley Chess School. You can read more about him (and my early chess days) here.

As an adult my biggest mentor is my friend IM (International Master) David Pruess. David was also a student of the Berkeley Chess School, and a “disciple” of Robert Haines. As a kid, David played his first tournament game against me, and we played side by side as members of the “Berkeley Bishops” for years. I met David again as an adult around the time I started to teach for the Berkeley Chess School. My interest in chess had been rekindled by teaching, and I became a regular at the East Bay Chess Club (David’s former chess club) during its dying days in Oakland. For the past 7 years David has supported my growth as a chess player as a kind of unofficial coach. Even after I moved to New York, we have remained good friends, and I still show him most of my tournament games.

BCS: And your greatest influence?
The biggest influence on my chess has always been the Berkeley Chess School. BCS taught me how to play the game and created an environment in which I could grow. It is very hard for anyone to improve or maintain interest in a vacuum, and BCS reaches a huge number children each year, bringing them together for tournaments, classes, etc.

BCS has always been an outstanding community. I met many of my friends growing up through BCS. As a high school student, BCS employed me part time to run kid tournaments and in my adult life, BCS literally plucked me out of a dead-end job and got me teaching chess, which has turned my life around. My love of teaching convinced me to go back to school and finish my degree, and I even met my wife as co-teachers of a Kindergarten chess class through BCS. I met both of my biggest chess mentors through the Berkeley Chess School and learned most of what I know about teaching from Elizabeth Shaughnessy and many other of BCS’ star teachers (just to name a few: Stephen and Eric Shaughnessy, Roger Poehlmann, Robert Hamm, Farid Watson, David Ceponis, the list goes on). One of my hopes is to make it back to the Bay Area in the next few years and continue teaching for BCS and helping it continue to improve and grow.

BCS: What you’ve been doing lately since you left Berkeley?
I moved from Berkeley to Rochester, NY, because my fiance (now wife!) was starting medical school. Work-wise, I’ve stuck with chess. I worked with Chess.com and ChessKid.com until this past June, and have been teaching chess in local schools for the Rochester Chess Center (a great program, similar to BCS, but much smaller). As it turns out, Rochester has a great chess scene! It’s not as strong as the Bay Area, but there are a good handful of other chess experts and strong A players that I get to play against regularly. Also living here is a man named Igor, one-time coach of the USSR Army Chess Team. He’s in the top 100 players in the country, and I get to learn a lot every time I brutally lose to him.