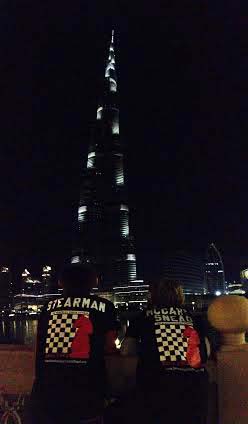 Two East Bay children, 7 and 10, take on the world in chess – and come back with lasting friendships

Berkeley, January 30, 2014 — While most of their classmates were preparing to enjoy the holidays stateside, two top-rated young Berkeley Chess School students and their mothers were busy planning the journey of a lifetime: traveling halfway around the globe to compete in the 2013 World Youth Chess Championships, held this year in the United Arab Emirates.

Callaghan McCarty-Snead, age 7, from Albany, and Josiah Stearman, age 10, from Martinez, made the 8,000-mile journey to Al Ain to represent the United States at the prestigious championships from December 17-29, 2013. They returned with fond memories and a sense of great accomplishment.

“World Youth was a wonderful journey that Callaghan and I will remember the rest of our lives,” said Cal’s mother Sarah McCarty-Snead, who accompanied him to the tournament. “Callaghan made lifelong friends from all over the world — even (longtime World Champion) Garry Kasparov!” 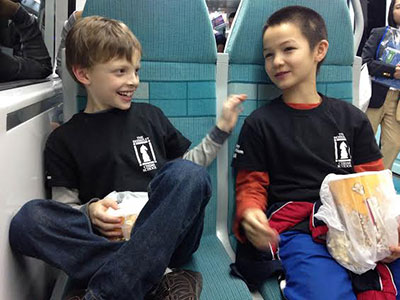 The pair, who originally qualified for the tournament based on their high chess ratings and their excellent performance at state and national scholastic tournaments, joined a record number of players (1,773) from 121 countries, to compete at the highly selective World Youth Chess competition, which was organized by the UAE Chess Federation and Al Ain Chess Club under the auspices of FIDE.

The tournament, open to students 18 and under by invitation only, has produced chess greats like Kasparov. The Berkeley Chess School also has a tradition of nurturing students, including Grandmaster Sam Shankland, 23, who trained with BCS from elementary school, won the World Youth Tournament in 2003 in the 18-and under group, and became a National Master at the age of 16. Grandmaster Jon Ludvig Hammer, who was World Champion Magnus Carlson’s second at the recent World Championship, is also a Berkeley Chess School alumnus.

Callaghan (“Cal”), a third-grader at Ocean View Elementary in Albany, was ranked #1 in the US in August 2013 in the 7 and under age group. Since arriving with his family from the UK two years ago, Cal has made a big splash in the U.S. youth chess scene, winning first place at the May 2013 California State Chess Championship. Cal holds a US Chess Federation (USCF) rating of 1622.

This was Josiah’s second World Youth Championship; two years ago he travelled to Brazil to represent the US at the age of 8. A fifth-grader, Josiah is a California State and National Chess Champion and currently ranks third in the nation in the 10-and-under age group. Last August, he became the second youngest chess expert in the US. To be considered an “expert”, a player must earn a rating of at least 2000.

The two young chess prodigies and their team ended up coming in 5th overall with a silver and a gold medal (India, China, Russia, and Iran rounded out the top four). But small chess-playing nations like Mongolia and Uzbekistan, a former Russian republic, also fared well, coming in 10th and 11th in the tournament. 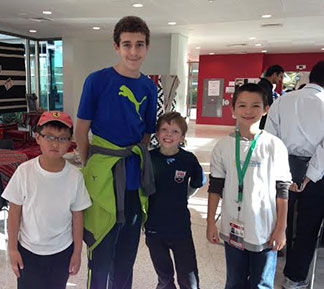 Each student played eleven games. Josiah was among the leaders in his section throughout and scored 7.0 points out of 11.0. Cal scored a very respectable 5.5 out of 11.0 for a 50% score.

McCarty-Snead said the tournament gave Cal the chance to forge close friendships with other young chess players from throughout the US and around the world.

“In addition to spending weeks with his new buddies from Romania, Russia, England and India, Cal now has chess friends from Texas, Georgia, New York, Southern California and many more states! It was fascinating to hear them exchanging internet usernames and planning their ‘reunion’ at nationals.”

Normally, chess-playing kids only meet their compatriots from other countries at virtual online games, but the tournament was a chance for them to meet in person. This world championship was further proof that chess is truly an international language.

“It was rewarding to see Cal communicating through chess with children who did not speak English in the skittles room, giggling and using hand signals.” 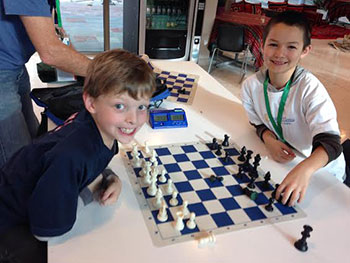 There was time for non-chess play, too: “After a loss or a win, the little chess masters would gather at the community Foosball table or head outside for a game of soccer,” McCarty-Snead said. One memorable game on Christmas day landed Cal in the ER with a chipped tooth. Not that it stopped him! It was a nightmare… We then had to visit a Dentist in Lancaster to what they could do about the chip and it’s safe to say it was a very bizarre Christmas. Luckily, his oral care is all up to scratch so we weren’t at the dentist’s office for too long.

The young chess champ’s mom learned quite a few tips as well: “Attending World Youth gave me the opportunity to meet other parents and exchange stories and study advice. I learned many things that Callaghan should and should not be doing to prepare and study for such a large international tournament and regular tournament games at home.”

Cal and Josiah attend BCS’ Friday night class for advanced students with National Master Roger Poehlmann, and participate in tournaments sponsored by the Berkeley Chess School. Josiah has studied chess with BCS since he was in kindergarten while Cal has attended BCS since moving to the Bay Area.